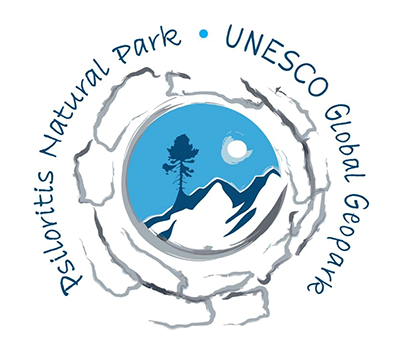 Apart from the visible geotopes of Psiloritis Mountain, there also exist many others that in order to be seen, one has to follow the same underground routes of the water, within the carbonate rocks. These are the caves, the special formations of the Earth’s interior, formed by the karstic weathering of carbonate rocks.

The reasons for the abundant caves that occur in Psiloritis Mountain has to be searched for in the predominance of the carbonate rocks, in the succession of the carbonate rocks with other impermeable rocks and in the complex geological history of Crete. From the sinkholes and potholes on the surface, to the underground caves and other formations, the underground cavities of Psiloritis are the missing rivers of its surface.

Life adapted in these underground worlds giving rise to species that can survive in the ageless darkness as easily as their ancestors did on the surface.

Apart from the different species of bats; snails, spiders, false-scorpions, woolise and insects are the main groups which constitute the fauna of Psiloritis’ caves.

The caves however are closely related with the people of the mountains and their diachronic activities. From their first appearance on the island the caves were their places of worship, the houses, the cheese-dairies, refuges during difficult periods and also sacred places. That’s why most caves have a significant archaeological and historic value (and like all the caves in Greece are regarded as potential archaeological sites).

Many of these caves are of high aesthetic value, important places for the ecosystems and critical for the water cycle and appearances. Some are easily approached and accessible by the public, like the caves of Sfentoni at Zoniana and Gerontospilios at Melidoni, while some others are a challenge even for the speleologists like Chonos at Sarchos or Tafkoura at Petradolakia.

The most important caves of Psiloritis mountain could easily constitute an individual sub-area, the speleopark, that could be used for any kind of activity such as training, science, outdoors activities or tourism. Even if only a few are open to the general public, most of them are accessible, adding an additional responsibility to the visitors regarding safekeeping this unique natural beauty and the fragile life that it hosts. 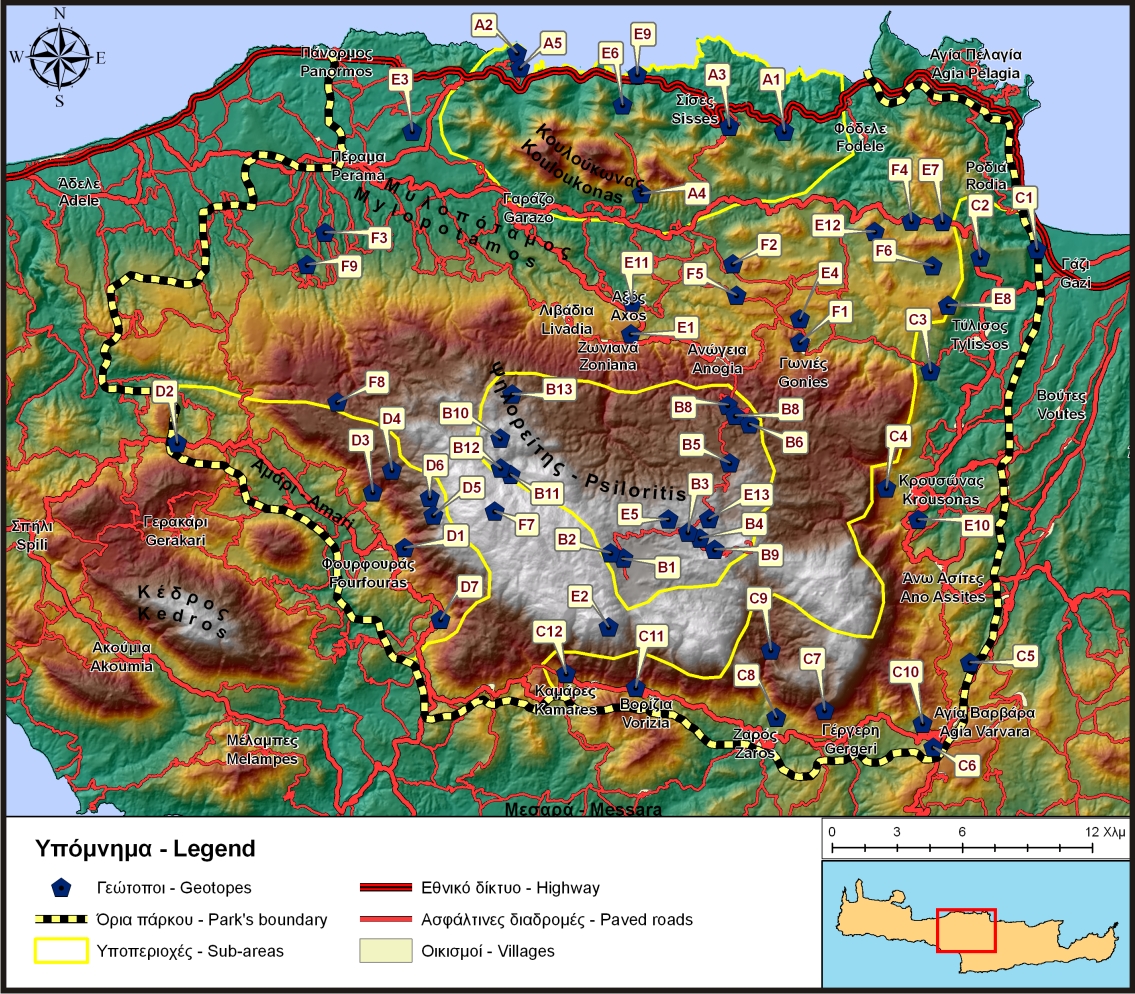 The Sfentoni Trypa cave occurs at the entrance of Zoniana village at a superb position dominating the valley of Mylopotamos. It is one of the two caves in the Park which are properly managed, accessible for disabled people too, and it is one of the most important and nicely decorated caves of Greece.

The cave is formed in the limestone of the “Tripolitsa” group, just dozens of meters over their contact with the underlying “Phyllite-Quartzites”. The big fault that forms the slope of the nearby mountains played an important role in the development of the cave. Water entered into the fractures of the fault forming an elongated cave of about 3.000 square meters. Visitors however are allowed only to visit two-thirds of it, walking along a corridor of about 270 meters.

In the cave live four species of bat and dozens of species of invertebrates (snails, spiders, false-scorpions, woodlices, millipedes, spring tails, cave crickets etc.). Some of those are colorless and blind, while at least two species are cave’s endemics. The cave also has some archaeological importance.

Excavations have shown that it was used occasionally by shepherds for thousands of years. Pottery dating has indicated that there was continuous, but not intense use of the cave, from Neolithic times till today. 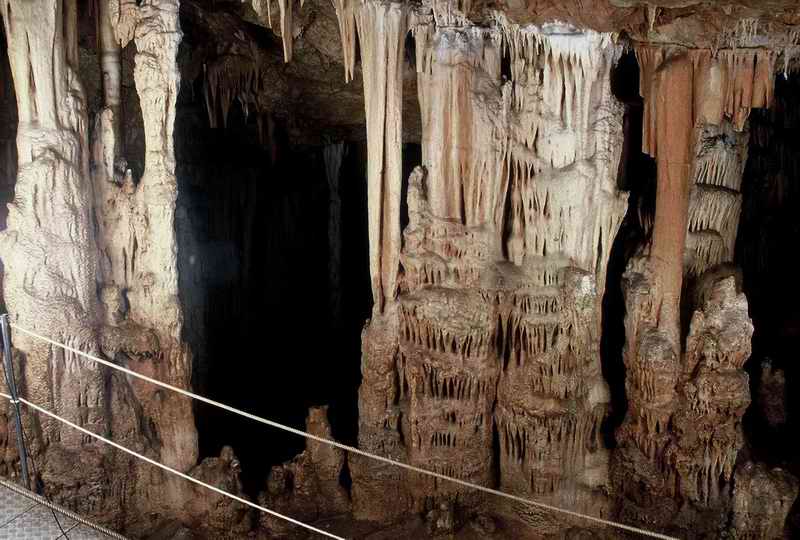 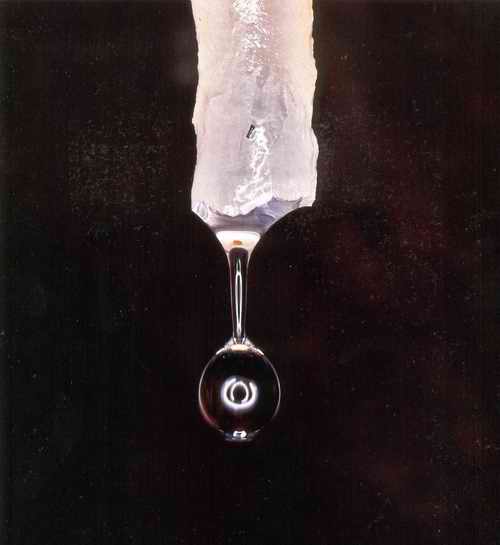 The cave of Kamares (or Kamaraiko) is one of the highest situated caves in Crete. It is situated at the southern slope of Psiloritis peaks, just at the foothills of Mavri Koryfi. The cave is composed of a big gallery that has been developed in the dolomites of “Tripolitsa” group exactly over the Cretan Detachment fault. One can visit the cave only by following hiking trails from the Kamares village or from the Nida plateau.

The Kamares cave is of great historical and archaeological importance for Crete due to the special pottery found there, which characterizes a complete pottery style of the Minoan era. Pottery comes from the early Minoan period presenting excellent pieces of art, with very thin sides of just few millimeters in thickness, colorful decoration and amazing designs. During this period the cave became a place of worship, and this was not accidental as it looks out all over the Mesara basin and Libyan sea, whereas there have also been found indications that it has been used since the Neolithic times.

Gerontospilios cave is located in the hills north of Melidoni village within the marbles of “Plattenkalk” group. Visitors can only admire the first large hall, as the rest is closed due to archaeological excavations. But even this small part of the cave is enough to impress the visitor. The great hall is one of the largest in Crete, while its stalactites and stalagmites are some of the largest in the island. Unfortunately, vandalism in the distant past has destroyed a large part of them.

The cave has been in use since Neolithic times, whereas during the Minoan and classical eras it was dedicated to the worship of the mythical, iron-made giant, Talos, who was protecting Crete and to the god Hermes.

Gerontospilios, is mainly however, a sacred place because during the Ottoman occupation hundreds of women and children were massacred there.

Near the small settlement of Kamaraki is Hainospilios, an elongated cave, like a gallery, which is part of an ancient underground river. It is still active in most of its parts. The length of the cave is about 200 meters, with a parallel gallery of about 120 meters which is richly decorated. The cave was formed within brecciated limestone of the early Miocene period (12 million years ago) that rest over the ophiolitic rocks of the area.

The entrance is narrow and sloping downhill and not suitable for those not used to caving. However, its impressive decoration can satisfy every visitor.

Huge stalagmite columns of more than 6 meters in height, but also a large number of many other, smaller speleothems, decorate the cave. Along the whole of its ceiling the intense marks of the water activity of the underground river can be seen.

The most important among the potholes-caves of the Petradolakia area, and one of the most important of Greece, is Tafkoura. It is the second deepest cave in Greece and one of the deepest in the Balkans, reaching -860 meters below the surface. It was formed within the platy marble of the Psiloritis area, probably having started on one of the many faults that fragment the rocks of the area. However, water followed the upward movements of Psiloritis, digging the rocks deeper and deeper to reach sea-level, finally forming this long pothole-cave system. The total, mapped length of the cave is about 6,5 kilometers and it is the longest of Crete. Tafkoura, together with the nearby caves Tafkos (-475 m.), Diplotafki (-400 m) and Mythia Kampathoura (-270 m.) caves form the deepest karstic .water conduits of Psiloritis, though which rain and the snow water goes to the Almyros spring near Heraklion.

Mougri cave is located in the middle of Kouloukonas mountains, just northwest of Vossakos monastery. It was formed within the “Plattenkalk” rocks, probably along one of the big faults in the area.

It is a very impressive cave with a rich decoration on its side-walls. It is formed by two main halls of about 2 thousand square meters in extent. Remnants of water rimstone dams in its deepest part indicate that it was active many years ago. It has been used by humans, at least since the Minoan era. The cave can only be accessed, however, by caving specialists.

The cave of Doxa is a small one developed within the limestone of the “Tripolitsa” group just over the Cretan Detachment fault and the “Phyllite-Quartzite” rocks in the Marathos area. Even though its extent is small, it does however have a marvelous decoration of different colors and forms. As it is near to the main road network the access to the cave is relatively easy.

In the limestone mountains formed by the “Tripolitsa” group north of Tylissos village occurs the Trapeza cave. After the small entrance there is a hall with a length of about 30 meters and extent of five hundred square meters, as well as several smaller halls around it. At the beginning of the hall stand two impressive columns. It is the most impressive cave of the Tylissos area from the archaeological point of view and it was a place of worship from the middle to the late Minoan period.

Kalo Chorafi is a coastal cave at the northern coast of the Park, near Bali village, formed within the “Plattenkalk” rocks. The cave is small and lacks decoration and many parts of it have also been destroyed by coastal erosion.

Some decades ago, the German paleontologist Siegfried Kuss excavated in the floor of the cave, and found many bones of deer, dwarf elephants and rodents of the late Pleistocene period (about 150.000 years ago). These findings shed light on the life of Crete during the late glacial ages.

The Chonos cave, near the village of Sarchos, is one of the favorite caves for speleologists, due to its complexity and its length. The cave is like a siphon and acts as an occasional spring. During heavy rain the cave is flooded at its deeper parts making it very dangerous. Furthermore, if rain is continuous then the whole cave is flooded and water comes out from its entrance.

The mapped length of the cave is about 1.500 meters and its depth is about 225 meter from the surface. The cave is one of the most important water supply conduits of the Almyros spring, which is located just 13,5 kms away. It is possible that the cave is also communicating through smaller siphons and sinkholes with the Livadia plateau located west of Kroussonas village. The cave develops northwards along the big fault zone of Kroussonas – Tylissos, and within the “Tripolitsa” limestone and dolomites, which are intensely fragmented up to a depth of about 100 meters.

Chonos is also a place of historical importance and was used as a refuge by the inhabitants during the successive revolutions of the Cretans against the Ottoman occupation. 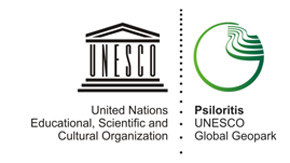